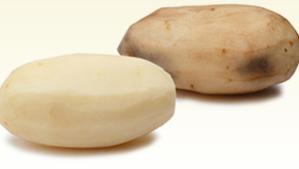 The U.S. Department of Agriculture on Friday approved a genetically modified potato, altered to resist bruising and to provide potential health benefits.

Called the Innate potato, produced by J.R. Simplot Co., it would be the first genetically modified potato in the U.S. in more than 10 years. A GMO potato developed by Monsanto Co. was taken off the market in the early 2000s after farmers and consumers showed little interest.

“This approval comes after a decade of scientific development, safety assessments and extensive field tests,” J.R. Simplot said in a statement. The Boise, Idaho, agribusiness company is a major producer of french fries.

The USDA examined whether the potato posed a threat to other plants. Its safety for human consumption is being reviewed by the Food and Drug Administration. J.R. Simplot, like other companies that develop genetically modified crops, voluntarily submitted its product to the FDA, and company spokesman Doug Cole said it expects FDA clearance in coming weeks.

The Innate potato uses genes from cultivated or wild potatoes to achieve its new traits, hence the traits are “innate,” Mr. Cole said. It was engineered to reduce black spots from bruising, a common reason why potatoes can’t be marketed. It also has been designed to produce lower levels of acrylamide, a potential carcinogen that forms in potatoes and other starchy foods when they are cooked at high temperatures.

That puts it among the first genetically modified crops to offer a direct benefit to consumers. Nearly all other modified crops, such as corn and soybeans, are made to withstand pesticides, making it easier for farmers to grow them.

J.R. Simplot plans to roll out three varieties of the genetically modified potato, the Ranger Russet and Russet Burbank, used for french fries and everyday use by consumers, and the Atlantic, which is used mostly for chips.

END_OF_DOCUMENT_TOKEN_TO_BE_REPLACED

Knobby, round, smooth, oblong, purple-mottled – Peru is home to thousands of potato varieties. Researchers are teaming up with local farmers to exchange know-how to protect the country’s diversity of spuds.

Implementation: The International Potato Center collects, analyzes and conserves seeds and plants of all potato varieties in the world by relying on farmers’ knowledge. The documented genetic diversity of the potato is meant to help identify robust varieties that can withstand different weather conditions

Biological diversity: Peru has more than 4,000 potato varieties. In addition, there are a further 1,000 varieties from other countries

Brownish grey, knobby and no-frills – that’s usually what potatoes are like, right? Not in Peru where the tuber comes in all colors and sizes and, at times, in curious shapes. The country is home to more than 4,000 potato varieties. Potatoes are one of the most important foods worldwide. The tuber was first imported to Europe by Europeans traveling from Peru – though only a few varieties grow here. The International Potato Center (CIP) wants to save this diversity of tubers as climate change increasingly demands more resilient varieties. The potatoes of the future are currently stored in the cool storage rooms and gene banks of the CIP while their counterparts are flourishing in the high mountains of Peru. Researchers are working closely with the local population by providing them with purified seeds for better harvests. In return, the scientists are drawing on local knowledge about potatoes and which varieties are best suited to changing soil and weather conditions.

END_OF_DOCUMENT_TOKEN_TO_BE_REPLACED

Very pleased to bring this update to the blog, I’ve went and purchased my seed potatoes to get all ready for chitting/sprouting. Exciting stuff ahead for me and my family, I’ve got some amazing sounding and looking varieties from red to purple colouring and even some that date back several hundred years.

I’ve actually went against my original intentions which was to go with just one variety of potato that’s high in blight resistance, original plan being that the thick foliage would shade out the weeds I’m clearing/battling.

So the change of heart was on the back of me thinking it’s not worth “wasting” a year growing one variety only to find out it’s not the best taster or grows poorly in my area. That would be the least of my problems if a certain pest was prevalent this year that my particular tubers was susceptible to, end up getting hit hard when it comes to harvest.

So the plan moving forward is to have multiple varieties, all with something slightly different to offer so I can benefit from the biodiversity element. The Irish Potato Famine of 1840 left 1 million people dead, the cause was that they were mainly growing just one type of potato, called the “lumper”, a severe blight hit and virtually wiped out all crops. It might not be 1840 but there is lessons to be learn from these kind of events.

I’ve invested massively in Heritage varieties as I feel as though most modern common varieties are carried by supermarkets and farmers markets (the preferred option) so are easily accessed at a fair price. Also I might be able to do a bit of swapping with other allotment holders if I make a few friends along the way and it would be maybe handy and interesting if I have something different to offer 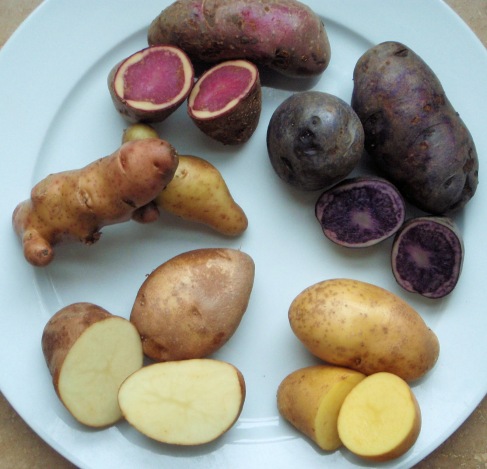 A downside is that some of these Heritage (heirloom) varieties can lack some of the modern disease and pest resistance. Their is an argument though that what they may lack in one area they can excel at in another, specifically taste I’m hoping. I had great experience growing Heritage Tomatoes last year and was blown away by taste so want to carry on the trend for my potatoes too. It may well be I get struck with the dreaded blight this year and end up next year opting for the more modern cultivars in the future but I’ll be happier for  having tried. Generally speaking I do support preserving old varieties so they are not lost to history, in a changing climate variety is key I feel and one day it may be the case that a epidemic could hit and a certain old variety turns out to have previously unobserved resistance to it.

I’ve choosen organic tubers where possible and ordered from the “organic plants” store to show my support for the “Garden Organic” group, unfortunately they don’t have every variety I was looking for so had to shop elsewhere. Looked at other “organic” stores but it was the old tried and tested Thompson and Morgan that had every other variety I wanted in one place so I purchased the rest there as I felt it would be reducing the overall mileage they’ll travel.

In all honesty I was planning on buying several of my products from a local supplier Carrolls Heritage Potatoes but in all honestly it appeared much more expensive than most other places so I’ll have to enquirer more in the future about weights and tuber numbers etc but for now opted for online vendors. Next year I’ll get a large part of my tubers from the local Durham Organic growing club meetings but missed the date this year, more to follow on that though.

Anyway, I’ll be talking much more on this over the coming weeks about this so for now I’ll leave it there and give you the names of varieties I’ve chosen. 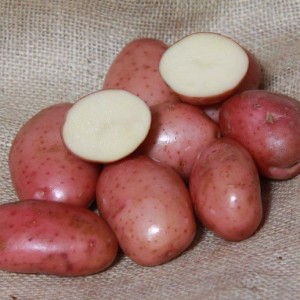 Next summer as part of my plan to deal with my perennial “weeds” (out of place invasive plants) is to plant a cover crop of potatoes on the allotment, my main aim really is for it to act as a weed suppressant throughout the year by crowding out (blocking light to) the weeds.

The variety I’ve chosen is ‘Sarpo Mira’ for it’s continual proven excellence with it’s Blight resistance. Considering that something as devastating as blight could completely destroy my efforts to keep the weeds down I recon doing one variety is my best option, I need to maintain good dense foliage for as long as possible.

Under normal conditions I’d say grow more than one variety of potato, as in don’t put all your eggs in one basket. One year one disease or pest may be prevalent and the next another, in my opinion to ensure and maintain a good healthy overall yield it’s best to have a diversity of them, each with their own merits. Also to help us eat seasonally I’d say plant one’s that you can harvest over a longer period. Obviously I’m ignoring all that kind of sound advice here in favor a dense foliage, even canopy and it being harvested over a shorter period to minimise the ground being left exposed to the elements and to benefit me in the future “digging in” of the Green Manure crop I’ll be following the potatoes with.

This allotment site I’ve been given has been left for so long it’s literally had a huge network of perennial weeds growing throughout and although I’ve done a relatively good job of digging a lot of them out in parts I’ve still got a huge way to go. The pulling and digging out will be a constant battle for a number of years but I’m not complaining, they are not all bad, often they are Dynamic Accumulators of nutrients too (more on that in the future).

My plans are in Feb to put in a mulch of Pine Needles (from friends/family Christmas trees) to try and acidify the soil a little bit. I’ll be doing a lot more digging out of weeds in the early spring, put in a ton of compost I’ll get at very low cost, it’s made locally from wood on the dairy farm (not organic unfortunately). I’m also going to put down half a ton of excellent quality ‘Virgin Top Soil’ (enriched with organic compost) that I’d got for almost nothing as part of a deal on some Biochar I purchased in bulk. I do have a problem with a bit of a Alkaline leaning soil and adding things like “Rock Dust” or “Biochar” makes that problem worse but these were products I had before getting the land. That all said I think I’m going to brave it and add them both in repetitively small amounts with the compost and topsoil and hope it evens it’s self out a bit. It’s a bit experimental (risky) in a sense but the added benefits of each of these products I think is worth chancing it on.
I will then plant the seed potatoes and along the way “earth up” (cover tubers) with the other half ton of that Topsoil. Come the end I will then basically harvest them from the point of view that I’m firstly weeding and secondly picking those tubers out, so kind of ‘killing two birds with one stone’.
I’ll then be lightly cultivating the soil, working it to a fine tilth, adding the worm casts I should have made in bulk by then PH and Nutrient testing the soil and adjusting were needed/possible. Finally planting a mixed Winter Green Manure crop to protect, rest and prepare the ground for next years harvests.

I’m be practicing “crop rotation” principles and not be planting potatoes in this ground again for another 4 years which is a bit disappointing in a sense but there are other parts of the garden for that as well as containers and even things like yams etc. I think crop rotations merits speaks for it’s self though so it’s a no brainer (makes sense).

I think that’s about it for now, hope the posts aren’t too long or anything, just thought I’d let you all know what my plans are for 2014. Let me know what you all think if if you have any idea’s for me.