I’ve just bought and watched this very informative documentary film about setting up and maintaining a “permaculture commercial orchard”, excellent for people wondering what permaculture looks like in a commerical sense then this is it. I really enjoyed the aspects on biodiversity, tree pruning, shrub and herbaceous planting, attracting beneficials etc. You might want to consider buying this one, I’m glad I did.

“The Permaculture Orchard : Beyond Organic is a feature-length educational film that will teach you how to set up your own permaculture orchard at any scale. We recognize the limitations of the organic model as a substitute to conventional fruit growing, and want to propose a more holistic, regenerative approach based on permaculture principles. Based on 20 years of applied theory and trial and error, biologist and educator Stefan Sobkowiak shares his experience transforming a conventional apple orchard into an abundance of biodiversity that virtually takes care of itself. The concepts, techniques and tips presented in this film will help you with your own project, whether it is just a few fruit trees in your urban backyard, or a full-scale multi-acre commercial orchard.”

END_OF_DOCUMENT_TOKEN_TO_BE_REPLACED

Organic farms are home to around 30 per cent more wildlife species than conventional farms, a meta-analysis of nearly 100 studies by researchers form the University of Oxford and from Sweden and Switzerland has found.

“This result has been robust over the last 30 years of published studies and shows no sign of diminishing,” they concluded.

They also noted: “The effect size varies with the organism group and crop studied, and is greater in landscapes with higher land-use intensity,” while the effect was also smaller in orchards and vegetable fields than on arable land.

But pollinating insects showed an even more marked benefit from organic practices, with species numbers around 50 per cent higher.

Welcoming the study, Soil Association head of policy Emma Hockridge said: “There is a clear solution for pollinators with a known outcome – support organic farming and we can have 50 per cent more species of pollinators in our countryside.

“Yet in return for this, and many other benefits, UK organic farmers currently receive the lowest payments across the whole of the EU. We are urging the Government to redress this balance and ensure organic farmers in the UK are adequately supported in the new Common Agricultural Policy.”

Why not create a “Bug Hotel” this year for all those many beneficial insects and pollinators. Creating a home for wildlife in your garden means you won’t have to work as hard in the future trying to attract them in. I plan on creating one in my allotment this year, right in the middle of the wild flower area.

This insect city made me smile

The more diverse the materials and designs the better in my opinion. Let the video inspire you and use what you’ve got laid around. I’ll cover this more in the summer when I create my own. Good luck with yours. 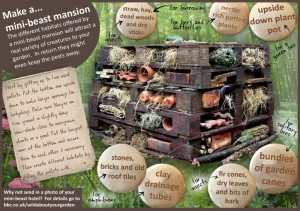