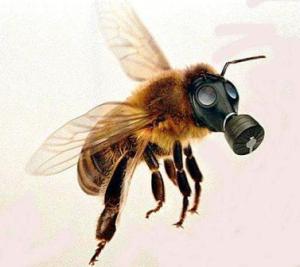 “Here’s just another reason to start your plants from seeds and cuttings and bring them on yourself rather than buy from Garden Centers and Supermarkets. You could always buy them from a local guy you know and trust and keep the money in the community. Also buying organic certified plants may reduce your chances of pesticide exposure for you and the wildlife.”

Many “bee-friendly” home garden plants sold at Home Depot, Lowe’s and Walmart have been pre-treated with pesticides shown to harm and kill bees, according to a study released today by Friends of the Earth and allies.

The study, Gardeners Beware 2014, shows that 36 out of 71 (51 percent) of garden plant samples purchased at top garden retailers in 18 cities in the United States and Canada contain neonicotinoid (neonic) pesticides — a key contributor to recent bee declines. Some of the flowers contained neonic levels high enough to kill bees outright assuming comparable concentrations are present in the flowers’ pollen and nectar. Further, 40 percent of the positive samples contained two or more neonics.

The study is a larger follow up to a first-of-its-kind pilot study released by Friends of the Earth last August. The new study expanded the number of samples and number of locations where plants were purchased, and also assessed the distribution of neonic pesticides between flowers and the rest of the plant.

“The high percentage of contaminated plants and their neonicotinoid concentrations suggest that this problem continues to be widespread,” said Lisa Archer, director of the Food & Technology program at Friends of the Earth-U.S. “Most gardeners have no idea that their gardens may be a source of harm to bees. We’re calling on retailers to get neonicotinoid pesticides out of their plants and off their shelves as soon as possible. Until then, gardeners should buy organic plants to ensure the safety of bees.”

END_OF_DOCUMENT_TOKEN_TO_BE_REPLACED

It’s not just the bees and their ilk. Neonicotinoid insecticides were known to harm important pollinators, and now a major report says they are killing insects, microbes, lizards, earthworms, birds and even coastal shellfish.

Neonicotinoids make up almost one-third of insecticides used. In 2011 the International Union for Conservation of Nature set up a task force to review the safety of systemic pesticides. After reviewing over 800 studies the group now says present use “is not sustainable”, and calls for a global phase-out.

The chemicals break down more slowly than early tests suggested, says author Jeroen van der Sluijs of Utrecht University in the Netherlands. These past studies, which informed the decision to allow the use of neonicotinoids, looked mostly at immediate effects. But long-term environmental build-up may be the real problem, so the task force says the previous regulatory studies “lack environmental relevance”.

The European Union has imposed a two-year moratorium on neonicotinoids, but their half-life in soil can be three years, so this may be too little to see what happens when they are gone.

The group found that levels of neonicotinoids in water often exceeded legal limits in both North America and Europe. Even in non-treated fields, the neonicotinoids and their breakdown products were harming many creatures. That includes bacteria, amoebae, worms and insects in soils; pollinators such as hoverflies and butterflies; and even lizards, because the termites they eat are dying. “What really surprised me is that these chemicals are even harming coastal organisms like crabs and shellfish,” says van der Sluijs.

The impacts on soil organisms could affect the whole nutrient recycling process, says van der Sluijs. Even when levels are too low to kill, the neural toxicity of neonicotinoids impairs earthworms’ ability to tunnel and feed. END_OF_DOCUMENT_TOKEN_TO_BE_REPLACED