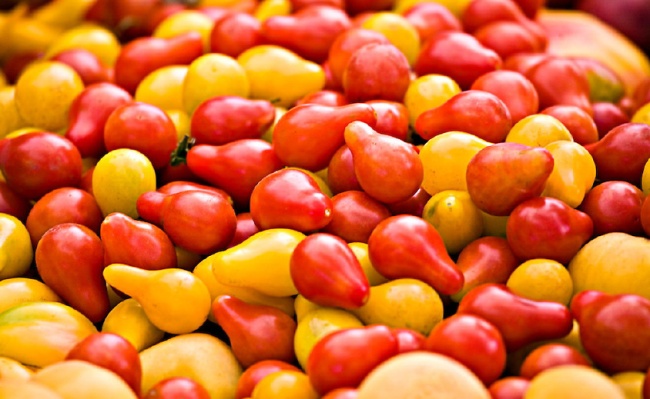 I’ll start by saying when it comes to food I love variety and as they say “variety is the spice of life” so I’ve ordered all a large selection of seeds this year for the family but that said only a single plant of each variety will be grown in the green/glass house. I’ll be giving away all the other spare plants I produce to friends (let me know if anyone is interested). I’ve mainly stuck to the small cherry/plum type this year as my Dad commented on how he liked the little sweet ones you get so thought I’d also buy a number of F1 hybrids as well this year to grow alongside the Heritage/Heirloom open pollinated type.

So the one I grew last year that all the family loved was “Small Pear Shape” from the HSL so that’s one I’m doing again this year. It might well be that “Red Fig” from Bakers Creek is the same type, it certainly looks similar, I certainly won’t be disappointed if I end up with two plants the same though as they are so moreish. As silly as this might sound to some I also got “Jujube Cherry” as it looked quite similar shape to some of the “pear” tomatoes from last year, not all of them were pear shaped some looked more like a grape so thought I might end up with something similar. I want to see which of these 3 similar looking types taste the best.
I grew “Garden Peach” in 2012 and loved that too, amazing tastes and textures, hopefully it still tastes as good as it did the first time around. Alongside this I’ll be growing the “Wapsipinicon Peach”, apparently it has the same fury skin and I want to find out which tastes the best out of the two.
I loved the look of the “Blue Berries” from Wild Boar Farms, I hope the colours come through as they appear on the photo, to be honest I’m not holding my breath. Anyway I just felt I should have at least one “purple/blue” flavonoid pigments, if nothing else but for those added antioxidants known as anthocyanins.
The “Pink Cherry” from the HSL was sent as an alternative to a “Fox Cherry” I was hoping to grow, apparently it’s just as good so fingers crossed on that one, nice surprise if it does well.

Now onto the F1s, they all sound really delicious with some of them classed as the “tastiest tomatoes available” and winning taste tests etc. I’m sure they’ll all produce well with their hybrid vigour and likely have added disease resistance too. Seriously can’t wait to sample these alongside some of the older tomatoes I’ll be doing, be interesting to see how they compare on all levels. That said “yield” is very unimportant to me, I’ll be decided solely on taste really with texture a close second and plant health taken into account of course.

I really don’t have space for any more but I may also consider buying a few plug plants of “Wladecks” from “Delfland Nurseries” as I loved them last year too but can’t get seeds any longer. They are huge sized beef steak tomatoes that literally snap the truss under their own weight. If you decided to grow them too plan to support the truss somehow, it’s highly likely to break.

I’m going to start seeds off in Root Trainers as I love the root balls they produce, I may end up doing a side by side comparison with Jiffy Plugs (peat pellets) if I end up buying any. Let me know if that’s something you wish to see done?

My name's Andrew Towell, I’m 32 years of age and I was born and live in a coastal town called Hartlepool located in the North East of England. The idea behind starting the blog is for me to research sustainable living practices, I enjoy growing plants so their will be an emphasis on organic food production. View all posts by Andrew

What do you think about it? Cancel reply