Thirty-four years ago when he began to plant trees, no one, including him, had the slightest idea that his effort would give birth to an entire forest.

It all began with a dream he had in 1979 to plant trees on barren land for small animals and birds to build their homes on the tree tops.

Chasing his dream, Jadav Payeng, then a young lad, belonging to the Mishing tribal community in Jorhat district, in the north eastern state of Assam, began to plant trees regularly.

Decades later, the trees have transformed into a lush forest covering 550 hectares of land, home to wild elephants, tigers, rhinos and deer.

Similarly, he is growing trees on another 150 hectares of land, which is adjacent to the first forest he helped plant. 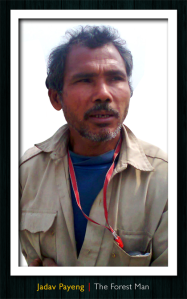 In appreciation of his single handed efforts, the Assam government has named the forest he helped grow after him, as Mulai Kathoni Bari or the forest of Mulai, Payeng’s pet name.

Payeng’s story of afforestation brims with country wisdom that needed no alarming statistics about the ill effects of deforestation, shrinking animal habitats and providing sanctuaries for natural wealth to survive, but only homespun instinct.

His story is not without hardship. The year he began to plant his trees was the one marked by major floods in Assam.

It was 1979 and he was a teen. As the floods rose, he saw hundreds of dead snakes washed on the river bank. He realised the top soil cover was being washed away, trees were uprooted and animals rendered homeless or dead.

“I realised how nature and the ecosystem continue to get damaged,” remembers Payeng.

Around the time, he also observed the flow of migratory birds was gradually declining to the forest areas and wetlands near his home and this disturbed him.

His village elders told him that with decline in forest cover and deforestation, animals lost their homes. The solution was to build new homes or forests for the animals they said.

“They gave me a few bamboo plants and asked me to plant those,” recalls Payeng.

He located a riverine island, a few kilometres out on the banks of the mighty River Brahmaputra, and began to plant the samplings.

A sapling a day

Religiously since then, Payeng visited the island and planted a few saplings every day for 34 years.

“The island was close to my home and I began by planting bamboo and indigenous or non-valuable plants. It’s only since the past 15 years that I have begun to plant high value trees like teak,” said the forest man.

Watering the growing area of plants posed a problem, too. He could not draw water from the river and water all the growing plants, as the area proved to be vast for one man.

He built a bamboo platform on the top of each sapling and placed earthen pots with small holes in them. The water would gradually drip on the plants below and water them through the week until the pots were drained off water.

Payeng also released termites, ants, earthworms and insects to work the soil to a fertile condition.

“Termites and ants are very good at improving the soil fertility. They burrow into the hard rocky surface making the soil porous and easy to plough,” he said.

As his forests grew, they posed new problems for the villagers who posed a challenge to Payeng.

The forest’s wild elephants began to stray to the villages on the edge of the forest and damage the crops and agricultural fields. Tigers were also noted hunting small village fowls and pheasants.

Angry villagers told Payeng that they would destroy his forest as the animals were posing a threat to their lives and crops.

Finding adequate food within the forest, the elephants stopped coming out to the villages, and soon the population of animals such as deer grew, providing enough game for the wild tigers.

Payeng’s obsession for growing forests has left his family to work as dairy farmers. They have 50 livestock and sell the milk to the villagers for a living.

After rushing through his chores in the morning and supplying milk to the villages, Payeng chases his dream of growing “more and more forests” along the islands near the Brahmaputra.

Payeng’s efforts in conservation have also been widely appreciated by the Assam government, academicians, and former president of India and eminent scientist, Dr APJ Abdul Kalam.

“Payeng is a true conservationist who is working generously on the issue, and he has shown what an ordinary person with good motive and will power can do,” said Assam chief minister Tarun Gogoi.

My name's Andrew Towell, I’m 32 years of age and I was born and live in a coastal town called Hartlepool located in the North East of England. The idea behind starting the blog is for me to research sustainable living practices, I enjoy growing plants so their will be an emphasis on organic food production. View all posts by Andrew

One thought on “The Man Who Planted A Forest”

What do you think about it? Cancel reply